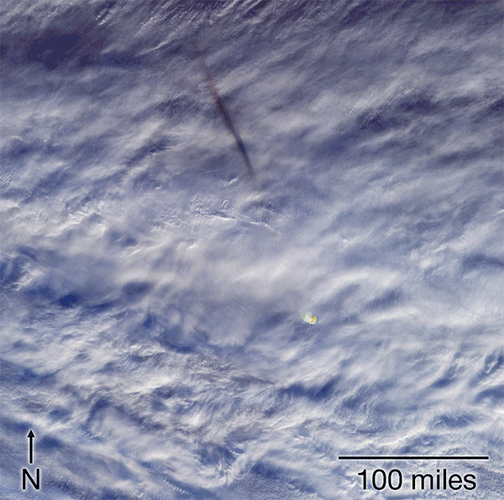 On Dec. 18, 2018, a large "fireball" - the term used for exceptionally bright meteors that are visible over a wide area - exploded about 16 miles (26 kilometers) above the Bering Sea. The explosion unleashed an estimated 173 kilotons of energy, or more than 10 times the energy of the atomic bomb blast over Hiroshima during World War II.

The Multi-Angle Imaging SpectroRadiometer (MISR) instrument aboard NASA’s Terra satellite captured images of the remnants of the large meteor. This stereo anaglyph combines two views from MISR, taken at 23:55 Coordinated Universal Time (UTC), a few minutes after the event. The anaglyph has been rotated 93.8 degrees counterclockwise to enable 3D viewing. The 3D effect can be seen with red-blue glasses, with the red lens placed over the left eye -- you may need to allow a few seconds for your eyes to relax to see the height of the orange-tinted cloud, visible in the lower right. This cloud was left behind the fireball after it super-heated the air it passed through. The shadow of the meteor's trail through Earth's atmosphere, cast on the cloud tops and elongated by the low sun angle, is to the northwest.

The Dec. 18 fireball was the most powerful meteor to be observed since 2013; however, given its altitude and the remote area over which it occurred, the object posed no threat to anyone on the ground. The angular information from MISR's nine cameras can be combined to calculate the height of the fireball in the atmosphere, which was 17.5 miles (28.1 kilometers) above sea level – more than three times the cruising altitude of a commercial plane and well into the stratosphere. Fireball events are actually fairly common and are recorded in the https://misr.jpl.nasa.gov.