If Earth were a movie screen, there would be no need for MISR. Movie screens are made of a material that reflects light nearly equally in all directions. So for people sitting in the right, left, and center sections of the theater, the movie looks equally sharp and bright.

But Earth is a more complicated place. Its surface, the clouds, even tiny particles floating in the air - each reflects light differently when viewed at different angles. This matters to us because the light being reflected is sunlight, which carries the energy that heats Earth. The details of how sunlight is scattered by forests, deserts, snow- and ice-covered surfaces, cumulus, stratus, and cirrus clouds, and smoke from forest fires, soot, and other by-products of industry -- all affect our climate.

Most satellite instruments look only straight down, or toward the edge of the planet. To fully understand Earth's climate, and to determine how it may be changing, we need to know the amount of sunlight that is scattered in different directions under natural conditions. MISR is a type of instrument, designed to address this issue; it views Earth with cameras pointed in 9 different directions [see illustration below]. As the instrument flies overhead, each piece of Earth's surface below is successively imaged by all 9 cameras, in each of 4 wavelengths (blue, green, red, and near-infrared). 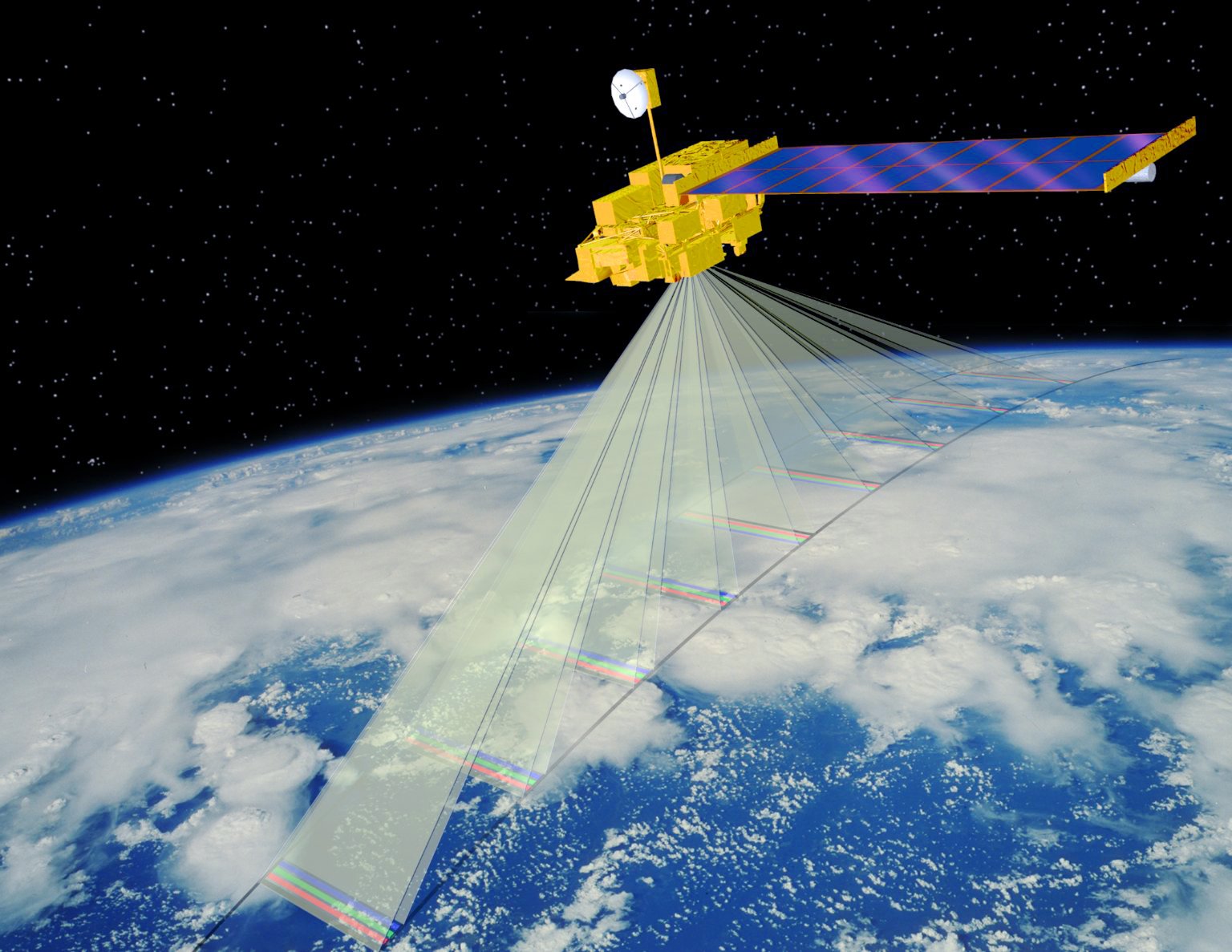 This computer-generated image shows the Terra spacecraft, with the MISR instrument on board, orbiting Earth. Direction of flight is toward the lower left. The actual locations imaged by the 9 cameras, each with 4 color bands, along Earth's surface are illustrated here with translucent surfaces.

In addition to improving our understanding of the fate of sunlight in Earth environment, MISR data can also distinguish different types of clouds, particles and surfaces. Specifically, MISR monitors the monthly, seasonal, and long-term trends in:

Aerosols tend to cool the surface below them, since most aerosols are bright particles that reflect sunlight back to space, reducing the amount of solar radiation that can be absorbed at the surface. The magnitude of this effect depends on the size and composition of the aerosols, and on the reflecting properties of the underlying surface. It is thought that the cooling effect due to increased amounts of aerosols may reduce or delay some of the expected warming due to increases in the amount of atmospheric carbon dioxide. But key details about aerosol properties needed to calculate even their current effect on surface temperatures are not known. MISR data makes it possible to determine global aerosol amounts with unprecedented accuracy, and to estimate particle size and composition.

Because they are very common, clouds play a major role in controlling Earth's climate. A cloud may warm or cool Earth, depending on its thickness and height above the surface. Because clouds are so variable, their effect on global climate is difficult to measure -- this is currently the leading uncertainty in climate prediction models. Stereo images from MISR provides new data about cloud top heights. The multi-angle observations will also yield information about the structure of clouds, the properties of cloud particles, and the way clouds reflect incoming solar energy.

The land surface of Earth is constantly changing. There are natural variations, such as the progress of seasons, and changes caused by human activities, like deforestation and desertification in overgrazed regions. There are social and political reasons for keeping track of these changes. But again because of the importance of solar energy in determining Earth's climate, we also care about the amount and manner in which surfaces around the globe reflect sunlight. MISR is able to characterize in detail the reflection properties of Earth's surface. From these observations, we will be able to tell where the surface is changing, as well as what effect these changes are likely to have on the climate of Earth.

Now let's look at some specific examples of this: Click on each of the following thumbnail images to see enlarged images that illustrate typical conditions of Earth's atmosphere and surface that need to be better understood in order to further our knowledge of Earth's climate, and the ways that MISR can be used in studying them. These are not the entire range of goals for MISR, but are intended to illustrate the diversity of the MISR experiment. 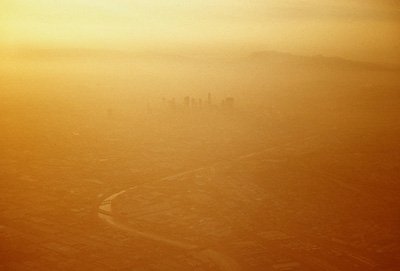 Los Angeles sunset: Sunset on a smoggy summer day in Los Angeles during the early 1990s. You can faintly see the tallest buildings in the downtown area poking up through the mist and smog layer, and you should just be able to make out the Los Angeles River wending its way across East Los Angeles in the foreground, and the Hollywood Hills in the background. MISR measures aerosol amount globally, including the particles that constitute smog and mist, and collects information about particle size, shape, and composition. 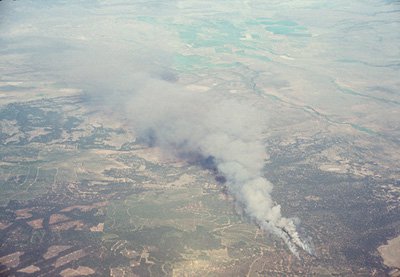 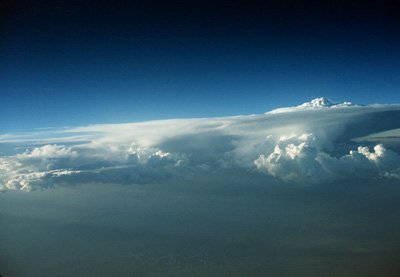 Cloud layer over the Colorado River: A thick cloud layer seen from an airplane over the Colorado River in the western United States, probably originating in the Gulf of California as part of the typical summer monsoon pattern. Thunderheads appear to be growing out of the cloud mass in this late afternoon photograph. Having 9 cameras with different look angles, MISR will view clouds in "hyper-stereo." This makes it possible for MISR to measure the height and texture of cloud tops such as those seen here. 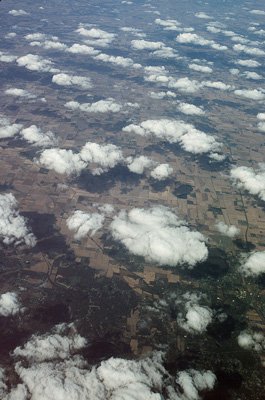 Cumulus clouds over the Midwest of the United States: A pattern of cumulus clouds casts its shadows on the farmland below, in this autumn 1991 aerial scene. MISR is able to classify clouds distributed over the entire Earth based on their height, shape, and texture. 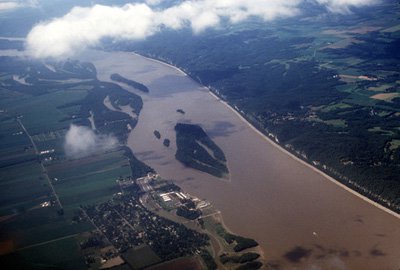 The Mississippi River near St. Louis, Missouri: A variety of surface properties is seen in this August 1990 view of the Mississippi River, surrounded by riparian woodland, farmland, and forest. MISR classifies different types of surfaces on Earth, and measure their brightness and directional reflectance. 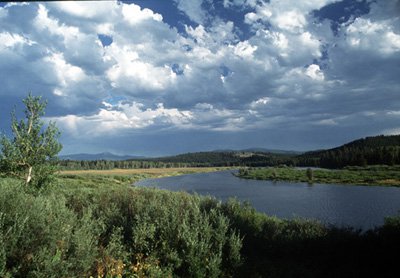 Oxbow bend in the Snake River: Dense dark vegetation and inland water cover vast areas of Earth, especially in the Northern Hemisphere, such as in this July 1994 scene of the Snake River in Oregon. Such areas warrant special study because of their climatic significance. MISR simultaneously measures properties of such surfaces and of the atmospheric particles above them.

Now let's look briefly at the MISR instrument itself: To accomplish its scientific objectives, the MISR instrument measures Earth's brightness in 4 spectral bands, at each of 9 look angles spread out in the forward and aft directions along the flight path. Spatial samples are acquired every 275 meters. Over a period of 7 minutes, a swath of Earth, about 400 km wide, comes into view at all 9 angles. Special attention has been paid to providing highly accurate absolute and relative calibration, using on-board hardware consisting of deployable solar diffuser plates and several types of photodiodes. Global coverage with MISR is acquired about once every 9 days at the equator.

MISR was built for NASA by the Jet Propulsion Laboratory in Pasadena, California, and is one of five instruments launched into polar orbit aboard NASA's Terra spacecraft in August 1999. The spacecraft flies in a "sun-synchronous" orbit, designed so that it crosses the equator every 98 minutes, always at 10:30 a.m. local time, as Earth rotates below.