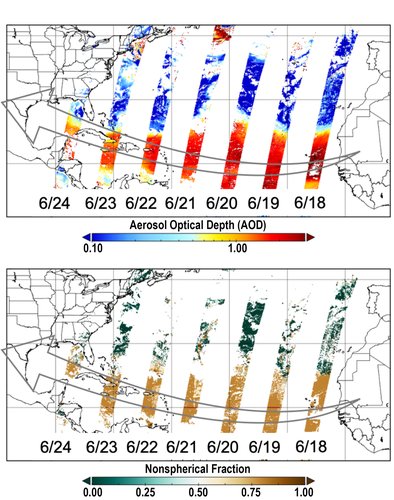 These two figures represent the transport from June 18 to June 24, when the plume reached the Gulf of Mexico.

Every year around 200 million metric tons of dust – a mass of more than 600 Empire State Buildings – blows off the Saharan Desert in North Africa and out over the Atlantic Ocean. In the summer, some of this dust can reach the Caribbean Islands and even the United States mainland, affecting visibility and air quality. On June 17, 2020 a large dust storm formed in the western part of the Sahara, producing a massive dust cloud that began moving across the Atlantic. The Multi-angle Imaging SpectroRadiometer (MISR) instrument on NASA’s polar-orbiting Terra satellite tracked this dust plume day by day across the Atlantic. The two figures represent this transport from June 18 to June 24, when the plume reached the Gulf of Mexico. The top figure shows the aerosol optical depth (AOD), which is a dimensionless quantity representing the amount of aerosol in the atmospheric column. High AOD values (warm colors; AOD up to 3.0) correspond to large amounts of aerosol, whereas small values (cool colors; AOD ~0.1) correspond to clearer conditions. MISR’s multiangle imaging capability also provides information on aerosol particle shapes. The bottom figure shows how the MISR aerosol retrieval algorithm can distinguish non-spherical dust particles in the plume (brown) from mostly spherical background aerosol (green). 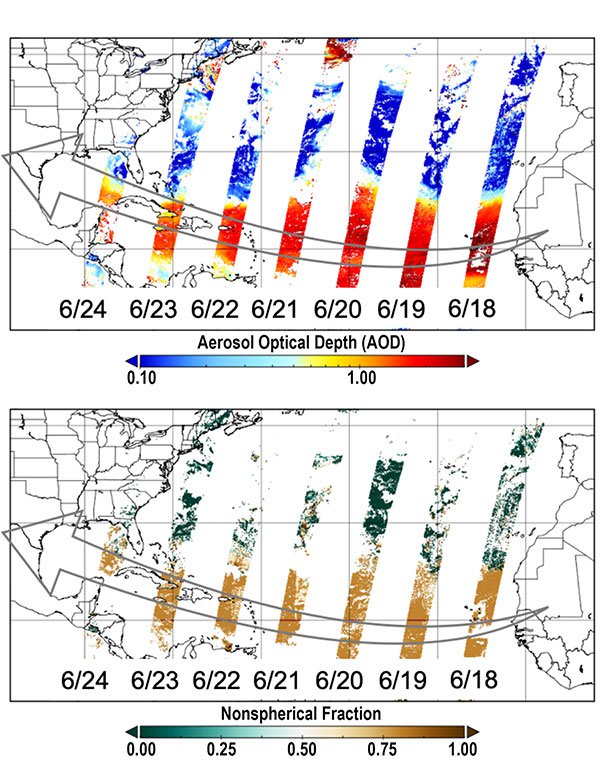 These two figures represent the transport from June 18 to June 24, when the plume reached the Gulf of Mexico.

On June 18, ground-based instruments on Cape Verde Island off the western coast of Africa reported very high AODs, exceeding 3.5. Under these conditions, only about 3% of the direct sunlight reaches the ground. The rest of it is scattered by the dust layer, making the sky appear extremely hazy. Typical AODs at this site are around 0.25, meaning that 78% of the direct sunlight reaches the ground. According to long-time researchers in the region, the amount of dust observed in this particular cloud is unprecedented. On the same day in the vicinity of Cape Verde, the MISR instrument reported AODs around 3.0, which represents the highest AOD value the current operational aerosol algorithm allows. About 80% of the aerosol was dust. The dust layer was also observed by the Cloud-Aerosol Lidar with Orthogonal Polarization (CALIOP) instrument aboard the NASA CALIPSO satellite. On June 18, near Cape Verde, this layer extended from 1.2 miles (2 kilometers) above the surface to 3.7 miles (6 kilometers) above the surface. By the time the dust cloud reached the Caribbean on June 21 and 22, the AOD reported by instruments on the ground had decreased to around 1.8 in Puerto Rico, although that still represents a record high for the region. The AODs measured in Puerto Rico are consistent with those retrieved from space by MISR on June 22, which were also around 1.8. This means only about 17% of the direct sunlight was reaching the ground. According to CALIOP observations, the height of the plume now extended from 1 mile (1.5 kilometers) to 3.1 miles (5 kilometers) above the surface. By the time the dust reached the Gulf of Mexico on June 24, the top of the layer was only 2.5 miles (4 kilometers) above the surface and the dust was reaching the ground. The dust cloud is forecast to move over the continental United States starting on Friday, June 26. The proximity of this Saharan dust to the ground means that it will affect the air quality over 5,000 miles (8,000 kilometers) from its source, in addition to changing how much direct sunlight reaches the ground. These data were captured during orbits 109046, 109061, 109076, 109091, 109106, 109121 and 109136. MISR was built and is managed by NASA's Jet Propulsion Laboratory, Pasadena, California, for NASA's Science Mission Directorate, Washington, D.C. The Terra spacecraft is managed by NASA's Goddard Space Flight Center, Greenbelt, Maryland. The MISR data were obtained from the NASA Langley Research Center Atmospheric Science Data Center, Hampton, Virginia. JPL is a division of the California Institute of Technology in Pasadena.