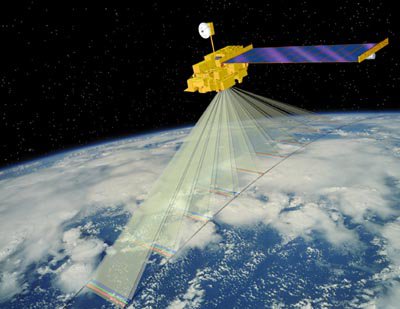 This computer-generated image shows the Terra spacecraft, with the MISR instrument on board, orbiting Earth. Direction of flight is toward the lower left. The actual locations imaged by the 9 cameras, each with 4 color bands, along Earth's surface are illustrated here with translucent surfaces.

MISR employs nine discrete cameras pointed at fixed angles, one viewing the nadir (vertically downward) direction and four each viewing the forward and aftward directions along the spacecraft ground track.

In addition to the nadir, the cameras will image Earth at 26.1, 45.6, 60.0, and 70.5 degrees forward and aftward of the local vertical. The fore and aft camera angles are the same, i.e. the cameras are arranged symmetrically about the nadir. In general, large viewing angles provide enhanced sensitivity to atmospheric aerosol effects and to cloud reflectance effects, whereas more modest angles are required for land surface viewing.

Why is there a nadir-viewing camera (An)?

The nadir (vertically downward) viewing camera (An) provides imagery that is less distorted by surface topographic effects than any of the other cameras. It also contains near-minimal influence from atmospheric scattering. This camera is thus particularly useful as a reference for navigating the MISR imagery, i.e. exact determination of the ground location being viewed.

It also provides a comparison with the other cameras for determining the way that imagery changes appearance with angle of view (called bidirectional reflectance measurement). This is particularly relevant for scenes containing vertical elements separated by gaps, such as forest canopies.

The nadir-viewing camera offers an opportunity to cross-compare observations with the more traditional single view-angle sensors.

Finally, the presence of a nadir viewing camera facilitates calibration in that: 1) calibrations using in-situ surface observations are more accurate with the higher atmospheric transmittance afforded by the nadir view; and 2) it ties together the calibrations of the fore- and aft-camera banks, which are done independently but include the nadir camera in each case.

What is the significance of the Aa and Af cameras (26.1 degrees view angle)?

Selection of the angle for the near-nadir A cameras (Af, Aa) is driven by their use in stereoscopic image mapping, i.e. using parallax from the different view angles to determine topographic heights and cloud heights. A base/height ratio near unity is considered optimal for stereo work. This quantity is the linear distance between points observed by two cameras divided by the height of the cameras above Earth. The angular separation between Af and Aa provides this optimal base/height ratio.

The angle of these cameras also provides a view sufficiently separated from nadir to provide independent information, but not so large that angular reflectance variations due to geometric effects close to the vertical are missed.

What is the significance of the B cameras (45.6 degrees view angle)?

Sensitivity to aerosol properties is provided when we view Earth's surface at an angle instead of straight down, thereby looking through a larger amount of atmosphere. The effect increases with the viewing angle. The B cameras (Bf and Ba) are positioned to utilize this aerosol sensitivity. Their placement also optimizes the ground track distance between the off-nadir A and B cameras, and between the B and C cameras, to ensure uniform scene lengths for high-resolution targeted observations (called Local Mode, -- see below). This results in a 300 km target length (along track) for Local Mode scenes.

What is the significance of the C cameras (60.0 degrees view angle)?

A view angle of 60 degrees provides observations looking through the atmosphere with twice the amount of air compared with the vertical view. Theoretical studies of the transfer of radiation to and from clouds also suggest that directionally oriented reflectance variations among many different types of clouds are minimized at this angle, and land surface studies suggest that it is a particularly important angle for estimating the amount of reflection at each ground point (called hemispherical albedo). These are the considerations that dictate the placement of the Cf and Ca cameras.

What is the significance of the D cameras (70.5 degrees view angle)?

A view angle as high as possible is desired to provide maximal sensitivity to off-nadir effects, and the Df and Da cameras are placed to satisfy this objective within practical limitations.

Having read the above paragraph explaining the five viewing angles, you might ask why the four off-nadir cameras are in pairs either side of nadir, for a total of nine cameras. Information at a large number of scattering angles is of interest to the scientific community, and by including both fore and aft sensors this scattering angle coverage is greatly increased. Also, having both fore and aft views is essential in order to obtain similar viewing with respect to sunlight as the spacecraft passes over the northern and the southern hemispheres of Earth, because the lighting effects are symmetrical about the equator.